After seemingly a month’s worth of rain in just a few days (and nearly a year’s worth of waiting), I obsessively watched the weather, anticipating Saturday.

This weekend was a fun-filled couple of days full of friends, family, great food and art.

Saturday featured my favorite local (Blacksburg) artist as we welcomed Kat Mills (Polys) to Pear Tree Hill Farm. The weather held (and we exhaled after a few rain drops fell, wound up with sunburns by the end of the show, and saw double rainbows before dusk). 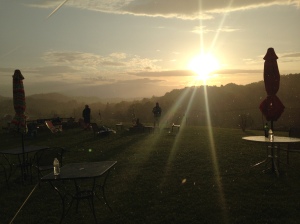 Friends and family came out.

Then sweet music filled the air. 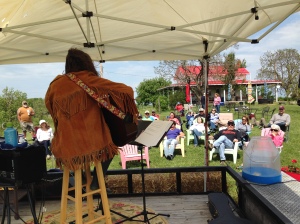 Many thanks to everyone who came out, brought food and beverages, and filled the tip jar. What a great day. We really must do this again….it is the ONLY way to fully enjoy our local talent. Kat Mills, thanks for sharing yours. 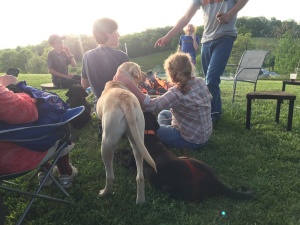 Atticus has a girlfriend

Saturday was a great day.

Sunday continued the good feelings as family gathered at the farm and we gave thanks to our mothers. Dogs ran about, albeit much slower than on Saturday. Fresh trout was smoked on the grill and some great leftovers from Saturday were revisited. Thanks to both moms for joining us for the concert and for a casual Sunday that still gave us some sunshine and joy.

We hope you and yours had a great weekend and special mother’s day, too.

Well, our first big meal of 2015 is in the books…and it was pretty good. 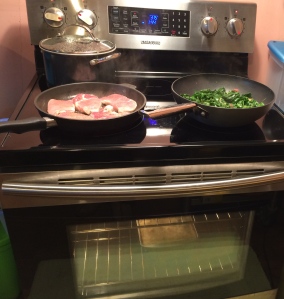 I found a highly rated recipe on Food Network from Emeril Lagasse, and I would concur with the ratings…

Heat oil in a large soup pot, add the ham hock and sear on all sides for 4 minutes. Add the onion, celery, green pepper, and garlic, cook for 4 minutes. Add the black-eyed peas, stock, bay leaves, thyme, and seasonings. Bring to a boil, reduce the heat and simmer for 40 minutes, or until the peas are creamy and tender, stir occasionally. If the liquid evaporates, add more water or stock. Adjust seasonings, and garnish with green onions. Serve over rice. (I had no liquid evaporate. I used a potato masher and mashed some of the beans to make it creamier)

Next up, Sautéed Pork Tenderloin

The richness and fat of pork symbolize wealth and prosperity. The rooting and pushing forward behaviors of pigs also symbolizes progress.

I thawed some tenderloin medallions I had cut and vacuum sealed last month. I seasoned the medallions with salt, pepper, and a little garlic and onion powders. 1 tablespoon of butter was heated in a skillet and the medallions were browned (about 3-4 minutes a side) then removed/set aside, placed in the microwave to keep warm. To the skillet the following were added and mixed until heated through: 1 tablespoon of fresh lemon juice, 1 tablespoon of Worcestershire sauce, 1 teaspoon of Dijon mustard. The sauce was poured over the medallions which were then garnished with fresh parsley.

Now for some Sautéed Collard Greens

For most, the folded, green leaves of veggies such as cabbage, kale, collards and such look like money. Greens are eaten across the world for hopes of financial well-being.

Fresh collards from the garden were cleaned, rolled then cut into ribbons. Some of the smoke ham was cubed. 1 medium onion was sliced. 1 tablespoon of unsalted butter was melted in a wok. The onions and ham were added and cooked for about a minute. The greens were added in stages and cooked to a wilt. A little salt and pepper were added to taste.

Finally, for sweet success, some Cornbread

Cakes of all kinds are served around the world on New Year’s Day and serve as symbols of sustenance, richness, and treasures. Cornbread’s golden color is a symbol of wealth (gold). For southern New Year’s cooks, an old saying sums it all up:

“Peas for pennies, greens for dollars, and cornbread for gold.”

I used another Food Network recipe for honey cornbread muffins:

Into a large bowl, mix the cornmeal, flour, baking powder, sugar, and salt. In another bowl, whisk together the whole milk, eggs, butter, and honey. Add the wet to the dry ingredients and stir until just mixed. I added the batter to a greased 9×9 bake pan.

Place muffin paper liners in a 12-cup muffin tin. Evenly divide the cornbread mixture into the papers. Bake for 15 minutes, until golden. Then add a little pat of butter and enjoy!

Last night, I took on the adventure of pickling some beets, thinking that it all seemed pretty easy and straightforward…shouldn’t take too long (cursed).

The process begins with preparing the beets:

A mess of beets 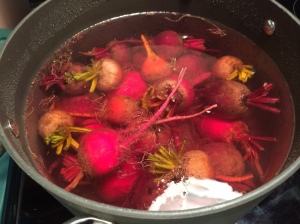 A good scrubbing under some cold water. What I neglected to read was that these guys had to be boiled for 20-40 minutes…ok. I’ve time. So, let’s boil them.

Meanwhile, I made my pickling liquid. I had to have onions in the mix.

Once the beets were soft, I drained them and rinsed them under cold, running water per Ball’s Book of Canning’s instructions…and “slipped the skins”…which I hadn’t done before, but after boiling beets, just running your fingers over the exterior beet causes the skins to “slip” right off. Very easy! Then I sliced instead of quartered. 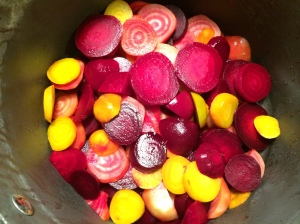 The sliced beets got added to the pickling liquid and brought to a boil. Then hot jars were packed with beets and liquid (some got whole cloves per another recipe) then processed. 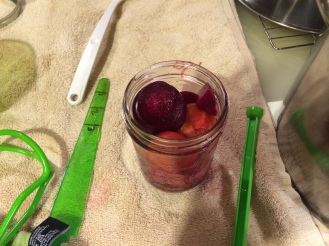 After processing, the jars were allowed to cool. Here’s the line up:

So, my hour and a half long project really was more like 3 1/2 to 4 hours long. Such is how it goes when I think something will be “easy.” Honestly, though, it WAS easy and fun….and delicious (I sampled a few pieces while packing the jars)….I just need to be sure to read the sidebars to recipes for better time estimations! 🙂

The squashes are doing great this year, and we have had fun growing some unusual varieties: zephyr (a type of yellow squash that is bi-color: yellow body, green end(s)), lemon (a fun lemon colored and shaped yellow squash), raven zucchini (dark green and delicious) and eight ball zucchini (a small, round zucchini with great flavor). 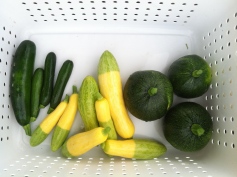 Why grow the same thing as everyone else, is what I think…but new or unusual can raise some important questions like: what do I do with it? How do I eat it? A little help please?

So, from a PTHF friend and fellow Marketplace Vendor comes a recipe suggestion for the cute and delicious eight ball zucchini. Here it goes:

– Added about 1/3 c. finely diced onion, sauteeing it first in a little olive oil.  When they were a bit soft I added the garlic.
– Used oil-packed sundried tomatoes because that’s what I had.  I skipped the “soak in hot water” step and added them when I added the garlic to the onions.  I didn’t need any extra liquid, but if I had I probably would have drizzled in some wine.
– Used jasmine rice because that’s what I had already cooked in the fridge.
– Also added about 1/4 c. finely shaved parmesan after I took it off the heat.  Could have even used a bit more.